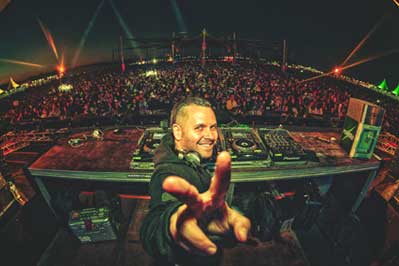 Ace Ventura is one of the leading and busiest DJs & artists on the progressive and psytrance scene. His music has been rocking the dancefloors, and he has been touring constantly all over the globe playing in every possible venue and headlining all major festivals. He is well known for his highly popular mixes, and his extra long DJ sets, and involved in four other highly successful projects: Alpha portal (with Astrix), Easy riders (with Rocky Tilbor), Liquid Ace (with Liquid soul) and Zentura (with Zen mechanics).

Behind the Ace Ventura project is Yoni Oshrat – one of Israel’s biggest talents in electronic music, with a career on top of the scene, stretching for over two decades. From an early age, Yoni was heavily influenced by music. He was born in a musical family with his father being a famous Israeli composer and songwriter (known for the Eurovision winning song “Hallelujah”), and it was no surprise that he went for a career in the Music industry, at first working in the film/ TV-industry as a sound producer. After discovering the blooming trance-scene in the mid 90’s he started DJing and teamed up with his friend DJ Goblin to form the psychedelic trance project Children of the Doc, who later changed their name to PsySex. Together they released 3 highly successful full-length albums on HOMmega Productions and played a big part in establishing Israel as one of the most important trance-countries on the globe.

After several years of intense touring, playing at some of the biggest events and festivals worldwide, Yoni’s taste shifted more and more towards the slower, groovier side of music, and in 2006 he moved onto form the two solo projects Schatsi and Ace Ventura. With Schatsi he was quickly featured on labels like Hadshot and Mylo’s Breastfed Recordings, and prime DJs like John Digweed spun some of his material. More attention was put into the Ace Ventura project, and using a fusion of the hard, pumping dancefloor oriented themes from PsySex sound with the deeper, groovier influences of progressive trance, the Ace Ventura project became a big success, and in a matter of just a few releases, such as the now classic debut “Cardiac Arrest”, he was already considered among the top producers on the progressive trance scene. In 2007 he finally released his debut solo album on Iboga Records. “Rebirth” & it was without a doubt one of the biggest releases of the year. It resulted in Ace Ventura ended up winning the Psytrance category at the Beatport Music Awards in 2008. A year later the ‘Rebirth’ album was followed by a 2CD remix album “Re: Boot” with remixes by leading artists from various genres, which together with other EPs and singles, also resulted in Ace Ventura again winning the Psytrance category at the Beatport Music Awards in 2009. May 2015 saw the release of the 2nd Ace Ventura studio album, ‘Paradise Engineering’ which was a huge success and resulted in a massive worldwide tour.

Ace Ventura has been playing all around the globe, at every possible venue and the biggest festivals, among them: Boom, Ozora, Antaris, Psy-Fi, Summer Never Ends, Emmaboda, Glade & BoomTown Fair in Europe; Symbiosis Gathering, EDC Las Vegas & Dreamstate in North America; XXXPerience & Tribe in South America; Rainbow Serpent, Earthcore & Maitreya in Australia; And Solstice in Japan. His tour schedule is full sending him crisscrossing the world with 2-4 gigs every week.